The Assembly are a collective who are based in the Old Tidemill Primary School in Deptford, SE8.

They are transforming the former playground into a community garden, wildlife haven and play space, and they have done a magnificent job of galvanising local young people. They run cook and eat sessions, they've built performance areas and a most excellent tree house on site! Last month they were one of three Lewisham sites  given Pocket Park funding to improve their facilities.

On Saturday 16 Nov ITV will be filming at the project as they have been shortlisted for a People's Millions award in collaboration with London Play. They need lots of people to go down to support them! There will be a live vote later in the month.

It would be a great chance to visit their site and see what wonders they have wrought! . Right now the team are looking for some paving slabs to cover a 6m x 5m area for a small log cabin which will be used as an outdoor classroom. If you have some- do get in touch with the team [email protected]

Building an educational hub for Deptford. Come and see our Wildlife Garden.

Assembly SE8 are a group of articsts and gardeners who are transforming the Old Tidemill SChool , Frankham Street;  SE8 4RN.

They are among several Lewisham community gardens  which have been awarded Pocket Park status.

This Saturday they start their BIG TREE HOUSE BUILD and need local people to rally round!

Carpenters most welcome! THe build is being filmed by a South Korean Tv Film crew who are reporting on the Mayor of London's POcket Parks scheme

Do it With Others (D.i.W.O.)-  Every Saturday in November

There are big plans afoot to make use of the Pocket Park funding to transform the garden and playground so that the space can become more accessible and inviting for everyone. However, for these plans to succeed, we really need your help.

Unlike DIY, which at times can be tedious and more often than not, purely frustrating, we thought the term ‘Do It With Others’ better suits how we want to transform the space in the coming months. What better way to be creative and have fun than do it with other people and go through the process together? This is why we are starting the D.i.W.O Club, so that you can get involved in physically changing this place and making it your own in the process.

Starting off this Saturday we're be building our second treehouse, our deluxe red shed space and our outside kitchen!

Deptford: Be an archaeologist for the day- Low tide walk in the Thames. 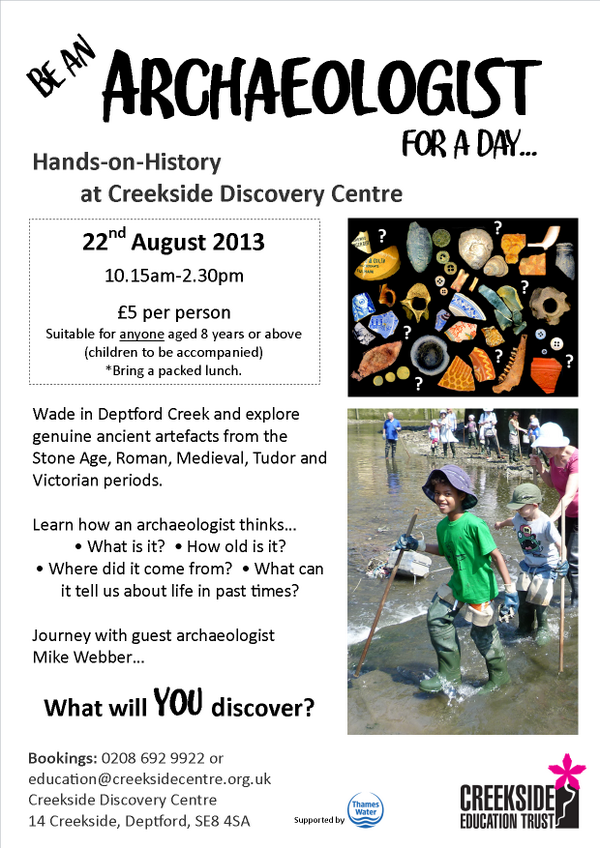 You will be involved in identifying new planting locations and matching suitable trees. You will be required to both liaise and share your expertise with others.

You will have background experience, and maybe formal qualifications, yet above all you should be a good communicator and like inspiring and working with people. Working hours and times are flexible, towards meeting our agreed target number of trees to be planted.

Apply by Letter with your CV to: Malcolm Cadman, Chair & Manager

Do you have a passion for flowers and want to meet people with similar interests?

Join the award winning flositry Department at the Deptford Campus!

They offer two bespoke courses that will help you develop a wide range of creative craft floristry skills and designs.

Both courses are 1 evening week over 20 weeks.

**Enrol now before it is too late**

The Old Tidemill School is currently home to a collective named Assembly. The group incudes parents and children, many of whom used to attend the primary school. Their aim is to make use of the now overgrown playground and transform it into a thriving and magical space for all the community to explore and play.

With the help of London Play, the Assembly Group have constructed a tree house and started a vegetable patch.

They are now looking for eager volunteers who would like to help transform this unique green space in the middle of Deptford.

Assembly are also keen to meet other creative projects that are out there and invite them into the space to collaborate on more exciting projects.

Deptford: A New Orchard for Deptford

The John Evelyn Community Garden in Deptford are planting fruit trees this spring courtesy of The Big Tree Plant.

Its a wonderland of a garden smack in the middle of the Pepys Estate.

So get your wellies out and help plant a new local orchard!