Hopefully this Lewisham Homes 'Get Gardening'  application process is less half-assed than it appears to be.

Having read through the application form,  I have my doubts that a gardener had anything to do with planning it. There is no mention of planting fruit trees for a start. Funding for community vegetable growing projects which comes through IN MAY. Sowing wild flower seeds IN MAY How very useful!

You can of course still direct sow runner beans and courgette, or spend half your funding buying in older plants from the garden centre. But where is the fun or the learning in that? So yeah, a clear ethos of Grow Your Own and sustainability at the heart of this Lewisham Homes scheme.

Anyway... here is the Application Form

If you're aware of a Lewisham Homes site which could do with gussying up- then there is up to £5,000 available for community improvment projects.

Successful applicants will be notified in early May.

How to apply If you have a fantastic idea for a community project then book your place now for a one-to-one support or training session on how to apply for funding. Email [email protected].uk or call Joy Burnett on 020 8613 7662.

Join Nature's Gym! The New Activity Calender is out.

Nature's Gym  is a fabulous  team of Lewisham residents who volunteer their time at Green projects and nature reserves around the Borough. It is led by a really fun and enthusiastic Conservation Officer. Well worth checking out.
It's a fantastic way to make new friends and gret a good work out too!
https://drive.google.com/file/d/0BzDNtVMWPY_SM2xrekFISHZEd2tkakRkTl82NnctcEdIcGJF/edit?usp=sharing" target="_blank" rel="nofollow">The Natures Gym Activitiy Calender  January to March 2014.

Do you have a passion for flowers and want to meet people with similar interests?

Join the award winning flositry Department at the Deptford Campus!

They offer two bespoke courses that will help you develop a wide range of creative craft floristry skills and designs.

Both courses are 1 evening week over 20 weeks.

**Enrol now before it is too late** Applications to be submitted by Friday 5th July.

If you'd like to collect from the Wearside depot please contact  [email protected] directly  to arrange a time / day.

Katy is the fantastic Allotments Officer based at the Wearside Rd Depot in Ladywell, just off Lewisham High Street. Maire has a mature forest garden and has planted to encourage local wildlife.  Maire demonstrated extensive knowledge of native species and habitats.

WINNER: Oscar Street Residents, Deptford
From a start of one house on the street putting out baskets and planters,  now the entire street  is involved in planting.  Every house has planters and hangin baskets.

Mr Lee wins again! Mr Lee has a wonderful garden with a deep knowledge of an experienced plantsman.  His garden has year round interest and colour. He also tends to the gardens of his infirm neighbours.  Wonderful!

SECOND: Mr and Mrs Board

The sharp suited Mr Argyle won for his fantastic summer display. His baskets and planters were greatly enhanced in this greatest of summers by Olympic flags, bunting and Unions Jacks.

The Frank Mason Cup was presented to the residents  by Carl Hughes of Glendale, Lewisham's Council's largest parks and green services contractor. Mr Hughes is himself is marking 40 years of service with Glendale.

The Oscar Street Residents who accepted the coverted Frank MAson Cup and the  £150  prize  were: 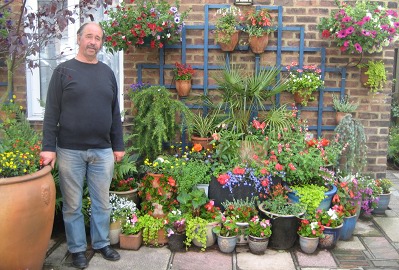 Many thanks to the 2012 Lewisham in Bloom Judges: Colin Melton and Alan Morgan of Beckenham Place Park.

Thanks also to the always graceful Katy Delaney who organised and facilitated the event. New has been announced of the opening of the third  funding round for Community Garden Small Grants in Lewisham.

The upper limit for any award is £600.00. The deadline for applications will be 31st August 2012.  Eligible projects must meet the objective of the scheme to:

1.Encourage the participation of young people in food growing activities. We will require evidence of youth participation (e.g. youth forum)

and at least one of the following objectives:

3. To support existing projects that encourage people to grow their own food for community benefit within LBL Green Flag Awards are the national standard for quality parks and green spaces. And Lewisham Parks won 14 awards this week!

Glendale is Lewisham Council's parks' contractor who must be congratulated, but we must not forget the many 'Friends and Users' Groups who put so much into ensuring we all have great green spaces to enjoy.

The following winners are managed by Glendale  in partnership with Lewisham Council:

The Green Flag Community Awards are for green spaces managed by voluntary and community groups.